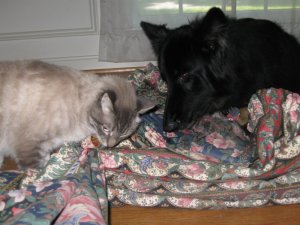 What’s your definition of friendship? Whom do you consider your peeps, your posse, your reference group? Think about who, by you, are “PLU” [a code acronym well-heeled British mothers used with their eligible offspring–often preceded by “not”–at public gatherings, to indicate that a would-be friend or suitor was…well, not suitable, not People Like Us]. To which their children replied [or thought], “Never mind the why or wherefore. Love can level rank…” It is a fictional motif that never grows old–from Shakespeare to Slumdog Millionaire.

How true is it, in real life? Do friendships and marriages last longer, when two individuals are similar “on many dimensions,” or when they are [to use a Cockney expression] “Chalk and cheese”? Most on-line match-making services are based on the premise that similarity breeds compatibility. “One of your own kind, stick to your own kind,” as her Latina friend sings to Maria in West Side Story. Otherwise, if you go with that Italian boy, it will all end in tears.

Pre-millenial sociological studies tended to support this view. Using factors such as Socio-economical status, education, faith tradition, and race, researchers found that the closer two people “matched,” the longer they stayed together. I think times have changed, but I don’t have the statistics to prove it.

Let’s go tight and inside [the brain], to formulate a theory of “peep-ness.” I had a patient in Detroit whose love life was full of drama and bad judgment, and who consequently spent long stretches of time on her own, except for “the comforting presence” of her Springer Spaniel, Bouncer. He “lowered her level of amygdalar arousal,” just by being near, welcoming her touch, and listening to her tell of her sorrows. Dogs, horses, and cats specialize in this; but humans can offer this “comforting presence” to one another, too. Some of us feel better in high-density living situations, just knowing [hearing] that neighbors are nearby. Some of us seek out membership in more than one reference group, so that if we feel slighted by one group or Special Individual, we can get a “second opinion” as to our okay-ness, later on that day, to neutralize the humiliation, pain & suffering, or even fear that rejection by Someone Whose Opinion Matters has aroused in us.

In dog training class, we were taught to use the Japanese word for friend–Tomodachi–to let our dog know that another [person, dog, what have you] was not to be feared or attacked. Lili and Zanzibar discovered for themselves that they were sympatico, with no cues from their owners.