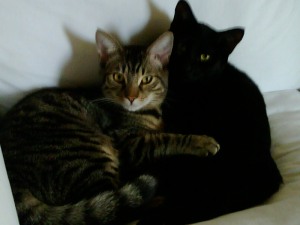 Couple of fun facts, before I get to the point. [What’s new?] The Hollies released this song in the UK in 1969 (featuring Reg Dwight on piano); although Neil Diamond [him again?] recorded it before that, but didn’t get around to releasing it until after the Hollies’ version was a trans-Atlantic hit. Reg (who got paid 12 pounds Sterling as a session musician for the Parlaphone version) is now better known as Elton John. [If you knew all that, you’re a Geek, no matter how Field Dependent you are.]

Now to Desmond & Penny, who were born to different mothers, but adopted together from the Rancho Cucamonga Animal Shelter. If you’re a film buff [or just know about Boys’ Town], you will recall that the song title is taken from the motto of that once all-boy (now co-ed) Kid Shelter in Nebraska, made famous by the Spencer Tracy flick, Going My Way. So, Poetically speaking, the aphorism means, “I do not regard or perceive my fellow Boys’ Town inmate as a burden, but rather as my dear brother, whom I carry because I can.” In the cats’ case, however, it is literally true that Desmond [the exotic-looking striped & dotted male] weighs less than Penny [the black female], although they eat the same amount. If they were horses, one would say that Penny was a “good keeper,” whereas Desmond was a “hay burner.”

Alas, with cats, dogs & humans, being a “good keeper” is no longer regarded as a Good Thing [except in the 3rd World, where it keeps you alive in times of famine].When our daughter & her apartment-mate anthropomorphize their cats, they have Penny saying, “Does my brother make me look heavy?” In our East Coast menagerie, the two “hay burners” (Ruth, the 6-pound Maine Coon cat & Lili the 71-pound German Shepherd) have long, fluffy fur which disguises their ferret-like thinness [until they get wet]. Not so, shorthaired Desmond (whom his vet declares is “just fine-boned,” not unhealthy).

So, here’s the point. The vexed topic of Body Mass Index (for our pets & ourselves) seems to be a no-win proposition. The range of “just fine” seems to be a moving target; and failure to hit the bullseye leads to humiliating glances & remarks from the general public, and/or alarming remarks from healthcare providers. If one is a child or a pet, it can also lead to the imposition of a special diet [to promote weight loss or gain], which in turn can lead to the pain & suffering of various forms of eating disorder. For instance, when our vet urges us to feed Ruth bigger helpings, the food ends up [quickly “recycled”] on the floor. When she urges us to cut back on Napster’s serving size, he whines at us like Oliver Twist, until we relent and give him “some more.” And, as previously noted, these 4 irritants lead to anger & the production of bad-for-the-body cortisol.

So, my first bit of advice to those who have what is currently called Poor Body Image, is to adopt your body as a rescue pet. [I know, sounds kind of Out There, but after all, I am at least a part-time Flake.] Even though the vet decrees “Feed Ruth more,” and “Feed Napster less,” I take her [expensive] advice as a Serving Suggestion, and temper it with common sense and compassion. I make subtle course corrections, not Draconian changes. If I were you, and I had been given the “shape-up-or-be-shipped-out [possibly, on a stretcher]” ultimatum, I would strive to be as kind to my “pet” body, as to any of the animals in my care. I would forget about “Best in Show,” and set my sights on “Getting Better. Trending in the Right Direction.”